The Porsche Club of America Sim Racing Series 4 proved to be the best series yet. Offering our club members the excitement of racing at home with other members. It allowed fans of our drivers, the PCA, and iRacing to watch live racing at home in the midst of a stay at home order with no other live racing happening. Allowing a way for our club members to stay connected, and have fun.

Series 4 saw the most growth of members ever. The growth was so large in fact, that the race times had to change to accommodate double the amount of races in our broadcast time with Podium eSports. And a huge hats-off to our Podium eSports team that did an excellent job of announcing and broadcasting the race and trying to show as many of our drivers as possible for their fans. The excitement brought through the announcing really makes the races a pleasure to watch.

This series had 4 different classes assigned based on iRating points. They were PCA Rookie, PCA Sportsman, PCA Club, and PCA Pro.

PCA Sim Racing was able to enjoy fixed setups for all the classes provided through our partnership with Virtual Racing School (VRS). VRS offered a special data pack for drivers who opted to subscribe to their service.

For the first five races, through Road Atlanta, there were two races with Pro and Club racing together and Sportsman and Rookie racing together. The last three races on the schedule, Sebring, Silverstone, and Road America, all the classes raced separately.

The last three races on the schedule, Sebring, Silverstone, and Road America, all the classes raced separately.

The 8 race series provided a dynamic group of tracks from around the world. Ok, it was 4 countries, but it’s only an 8 race series.

We started off at Mid-Ohio Sports Car Course. This was a 45-minute race on a 2.25-mile track starting in the morning, as did all the races.  There were several 3 wide moments on some of the narrowest bits of the track proving our drivers’ skill and abilities for the series ahead. The drivers were thrown a bit of a curveball on this race as the tire model had just been updated for the car chosen for the series, the Porsche 911 RSR.

Our next race took place at Circuit Gilles Villeneuve. I think all of the drivers will attest to this being the most difficult track on the series schedule, even harder than the Grand East configuration of VIR that came next. This was another 45-minute race for our two races at the time with our four classes. The reason behind the difficulty, especially in iRacing, is the braking at this track. Everyone’s setup at home is different and being able to brake on the limit is the most challenging thing to master. With Circuit Gilles Villeneuve there are several braking zones into very tight corners from nearly maximum speed. Some of the corners are almost designed to throw the car off balance, so in the simulator, it’s quite difficult. Our sim racers did astonishingly well here considering having nearly a full grid of 60 cars on track at once.

Virginia International Raceway with the Grand East configuration made for a tight track with minimal passing opportunities and the first 60-minute race on the calendar. I personally thought it felt like driving a backroad in the California foothills that I often would do with my Porsche 911 with the elevation changes and tight corners. Taking this kind of track at race pace required our sim racers to have full focus and precision the entire race.

Circuit de Spa-Francorchamps has a certain allure to it. As a driver, it’s a superb venue with 4.35 miles of iconic corners. The fourth race of the series, this was also an hour-long race using the classic pit design. Our fans loved this one the most with our highest views live and as I’m writing this nearly 10,000 views!

The fifth race and final race for our multiclass racing setup was Road Atlanta. With two nearly full fields of 60 cars, this was the last long 60-minute race for the series. It challenged our drivers to exhibit excellent racecraft as the top of the field worked their way through traffic later on into the race.

The first time running in individual classes Sebring International Raceway provided the drivers with some elbow room on this 3.7 mile circuit. Even running the classes separate we still had 49 drivers participate in the Sportsman class race, nearly full again! This is a deceiving track as in some places the lines aren’t drawn on the track anywhere near the racing line and others your car skips like a stone skipping across water. The sim racers navigated the track with ease continuing the group’s steady growth in both numbers and skill amongst drivers.

Silverstone Circuit – 2008 is a 3.14 mile configuration with all the iconic corners. The second to last event of the series saw our racers battling now for the last few points available. There was no letup in the excitement here with all four classes putting on a show.

Finally, we had the season finale at Road America, a lovely 4.04 mile course in Wisconsin. The club’s growth topped out with over 130 PCA Members participating! After an entire series of great racing, it is awesome to see so many people continuing to get involved with this group.

A big congratulations to our class winners and to everyone participating in these events, because without you there wouldn’t be this great group! 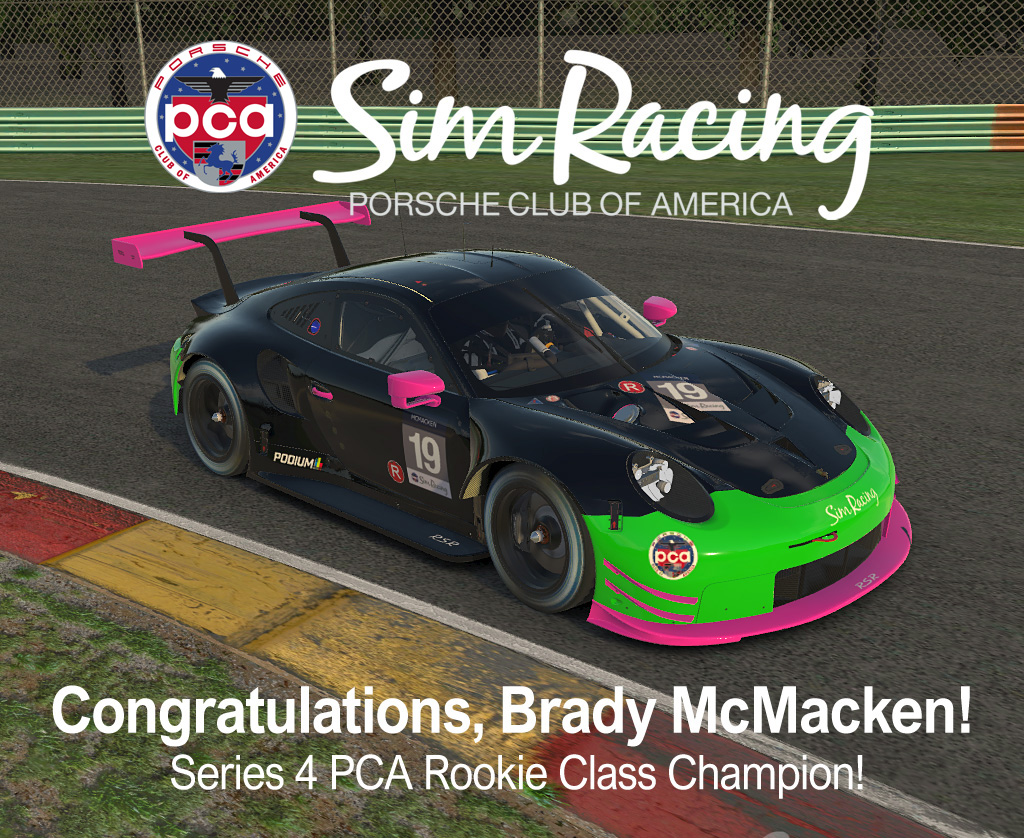 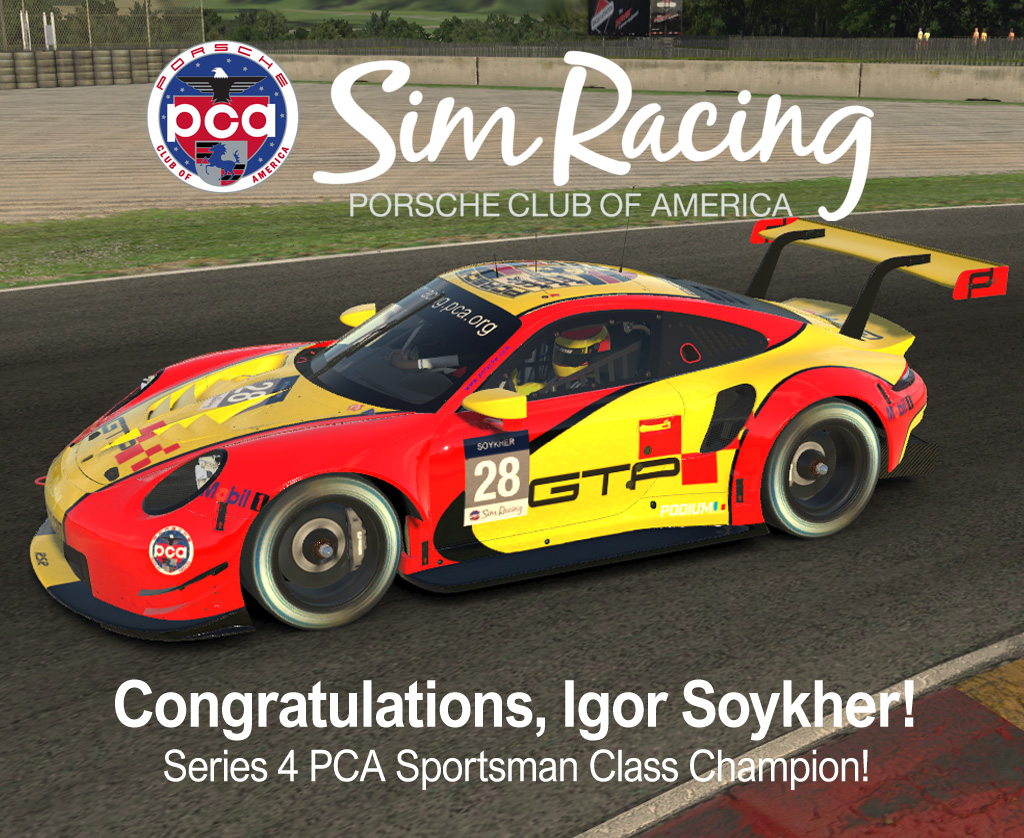 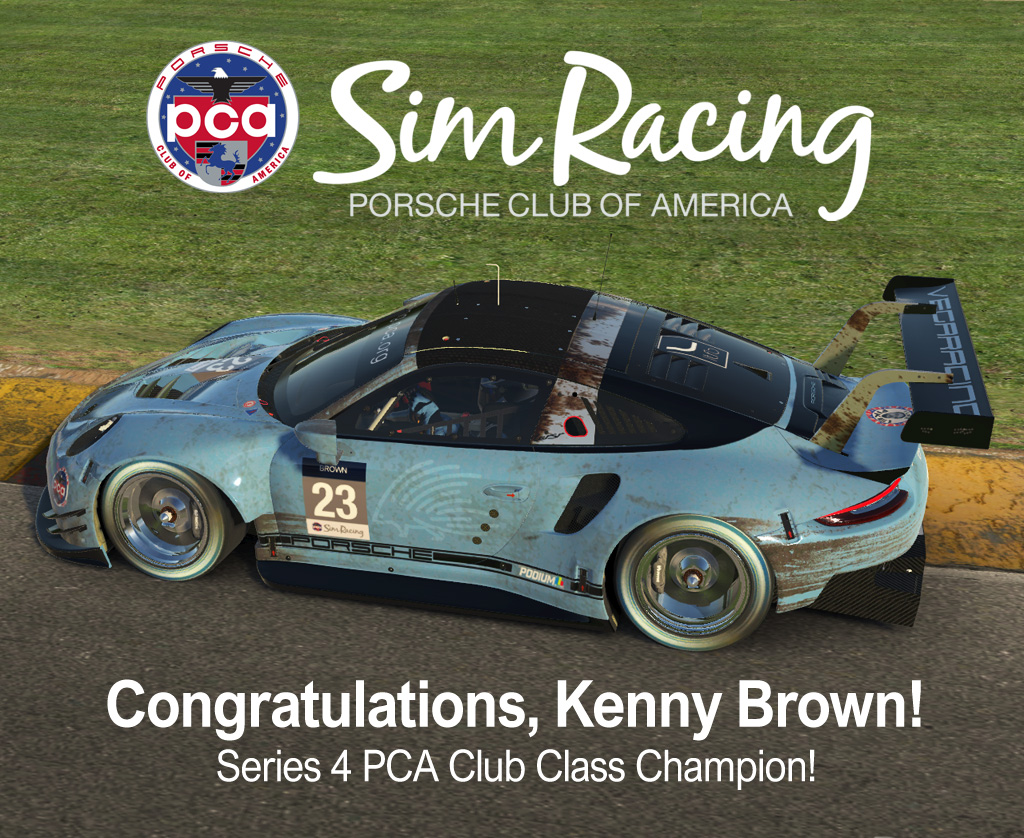 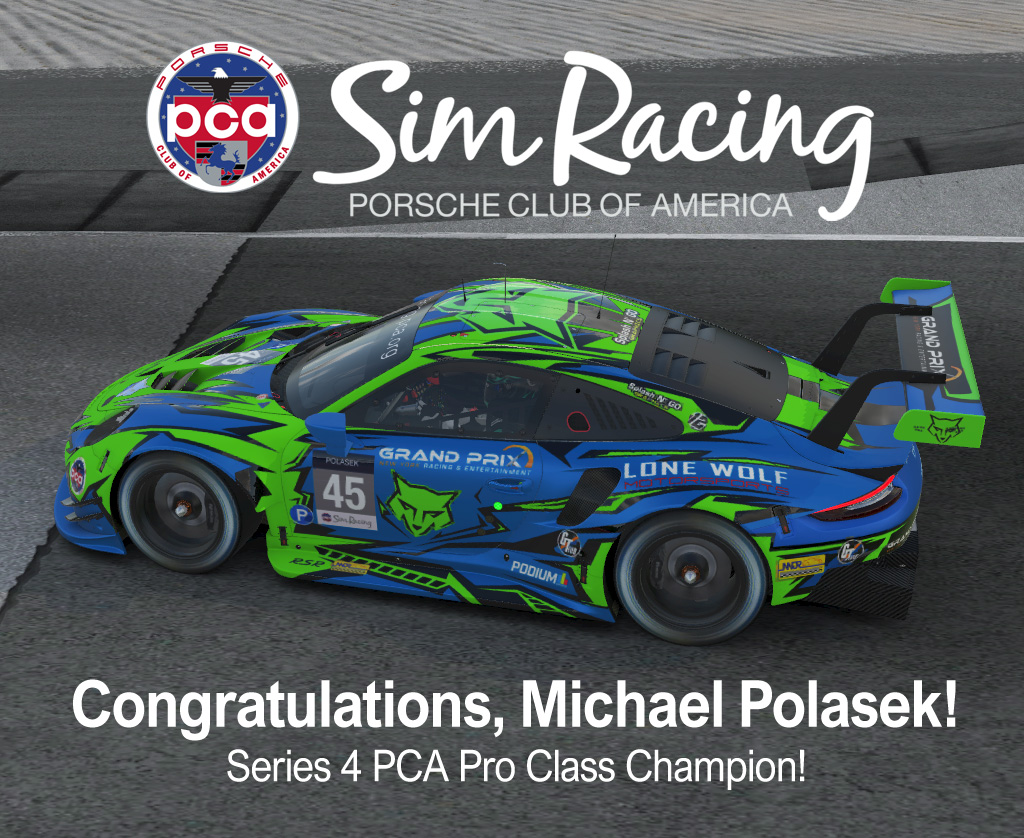