The finale of the Porsche Club of America’s Series 5 took place at the Daytona Road Course through iRacing. Our event started off with an interview hosted by our Podium eSports announcer James Pike with Justin Moreno, the Vice President of Marketing at Hagerty. Justin told us about his involvement with PCA Sim Racing and how it benefited him personally with his real-life driving events. He also explained about Team Hagerty and the passion they have for elevating and promoting driving events amongst enthusiasts. 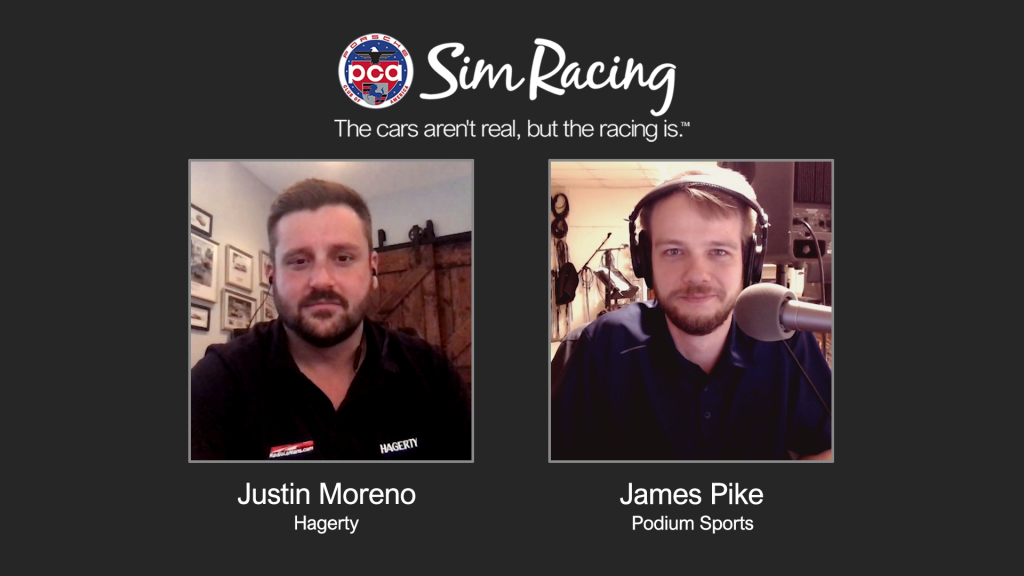 The Hagerty sponsored PCA Challenge Class started with a walkthrough of the course by Taylor Burris. Eon Simon got the jump at the start of the race from his pole position and lead the field and accelerated away. Some of the drivers went 3 wide before narrowing down and conceding positions amongst the field. Chris Ciborowski held onto the second spot with John Crooke in third at the beginning of the race. Justin Moreno made a pass into the third position early on when Crooke got a slow down. Moreno made his way to the second position midway through the race with Ken Tubman close behind in third with Simon still leading. Trouble for Tubman saw Ed Eijsenring earn the third position. Eon Simon ended the race with the win. Ed Eijsenring made a pass with just a couple of laps left and was able to earn the second position. Justin Moreno was able to hold on and finish in third. 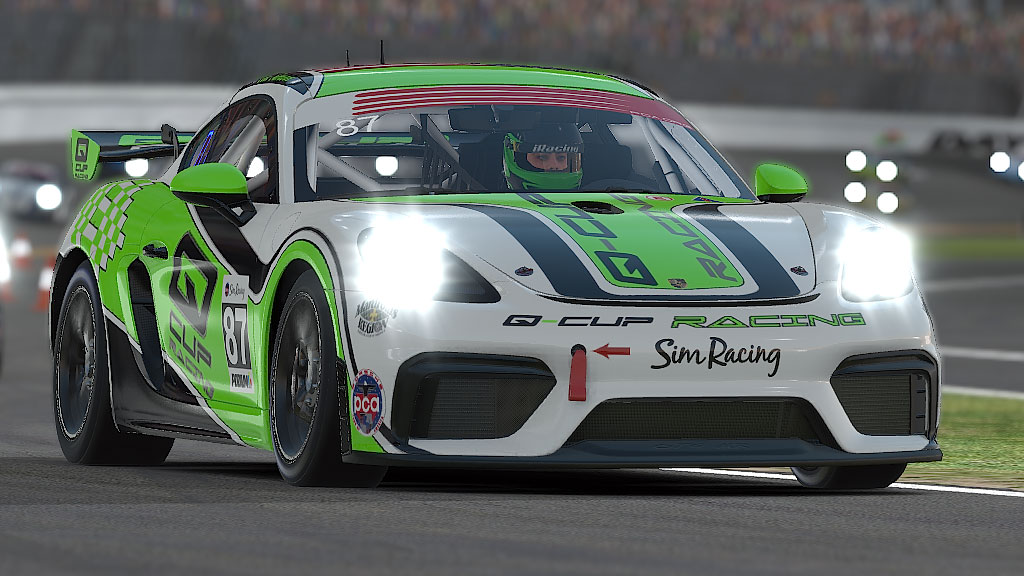 The LelandWest sponsored PCA Sport Class started their final race of the series with a very close competition at the top of the field for the series points. The race started with Earl Artz Jr in first with Chris Duffy and Jensen Benet close behind. Duffy and Benet made contact on the straight after just a few minutes of racing causing damage for Benet’s car. Sebastiano Balestrieri got into the third position due to the contact. Artz and Duffy kept it within a second of each other making for some very close racing. There were some fierce battles throughout the field with several cars getting the benefit from the draft at Daytona. This caused Julian Velez to make the move into third position near the midway point of the race and soon after Gregory Samson passing Velez into third. After several laps racing within a second of each other Duffy was able to get past Artz for the lead. Balestrieri was in the fight for third and also got the draft and make the pass to take over the third spot. Chris Duffy did finish first with Earl Artz Jr in second finishing side by side at the checkered flag with Julian Velez crossing the line in third. Due to a penalty after the race, Earl Artz Jr was able to earn the top position for the Sport Class. 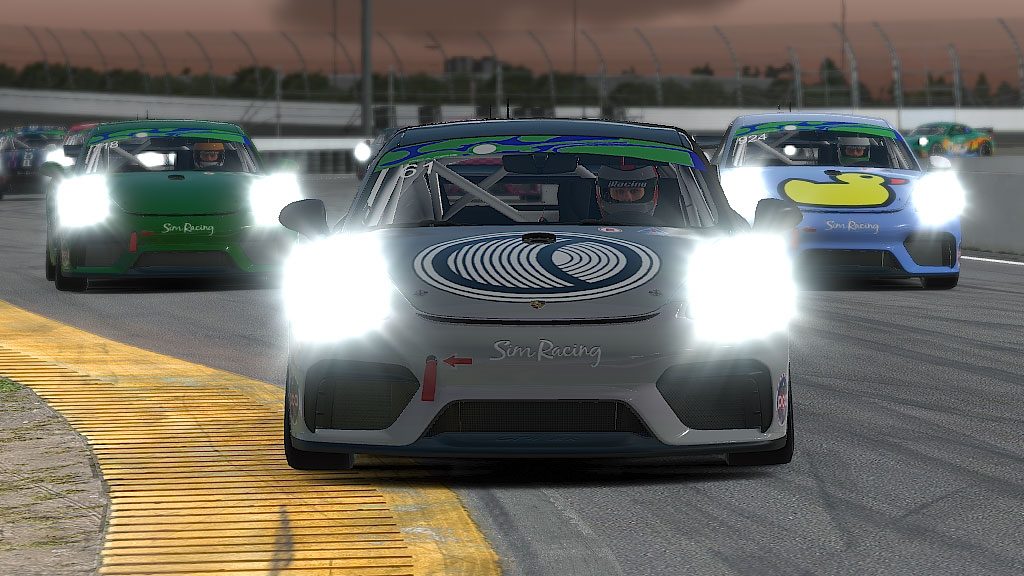 Michelin sponsored PCA Club Class had an exciting start with most of the cars running side by side for most of the first lap. Rafael Amorim was able to get into the first position with Jeff Smith and Jared Rodeheaver close behind. Smith and Rodeheaver were able to get past Amorim from the draft on the oval sections of the track. Another race with very close racing amongst the top runners meant most of the top 15 were within a second of each other allowing for exciting drafting-induced passing. A slight mistake by Smith put Rodeheaver into first with Amorim in second and Smith in third. The top three were side by side for several laps with Amorim slowly gaining on the field after making a pass into first. Sean Benet lost out in the braking zone when Ed Nelson made a pass into the bus stop into third. Ed Nelson was on a mission making his way into the first position and finishing with the win. Jared Rodeheaver was able to battle it out amongst the top runners in the Club Class and come away in second. Sean Murphy was able to cross the line in third with Rodney Campbell and Jeff Smith less than a second behind. 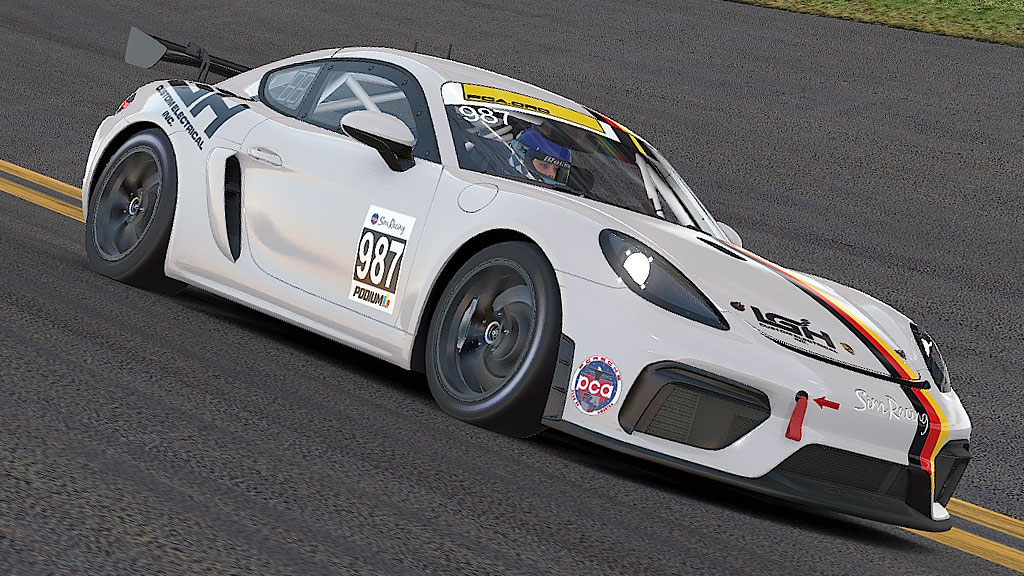 The Porsche sponsored PCA Pro Class once again did not disappoint with the top 17 drivers qualifying within a second of each other. A clean start had Josh Vieira in the first spot with James Huth in second and Peterson in third. As we saw from the other races there were several position swaps from the drafting advantage on the oval sections of the course. Midway through the race had Vieira in first with Christopher Paiz in second and Huth in third. The pro class broke up into three very close packs with the front 5 cars running together, the midfield running extremely close and the rest of the pack not far behind. Christopher Paiz was able to get in the lead for the last couple of laps, but it was James Huth that was patient and made the pass at the last second before the line finishing just 0.036 seconds in front of Paiz. Matthew Kuekes battled hard this race and was able to finish in third.

Also, thanks to Z1Dashboard for supporting us on the data side and VirtualRacingSchool providing baseline setups for our racers to use.

Once again Podium eSports provided an excellent broadcast in all the races providing our viewers with excellent camera angles and announcing.

This may have been our final event of Series 5 but the action with PCA Sim Racing will not stop any time soon! Stay tuned for more events including, endurance, international PCA races, and Zone level excitement. Zone events are starting in as little as 10 days! If you aren’t a part of the action now is a great time to get involved, visit pcasimracing.com for more information!