Sim Racing Reflections at the Rolex 24

You know, it’s a slogan or a tag line, “It’s not just the cars, it’s the people”. We’ve all heard it, and some of us (like me, for instance) even plug it into communications to promote the club or activity within it.

And when you’re relaxing in the Porsche Club of America tent at the kink in the Daytona infield on race day, it may not be the thing that’s most on your mind.

On the other hand, when you notice a face that looks familiar and asks a name, and the response is an acquaintance from on-line of nearly a year, the phrase takes on a new meaning. James Pike shook my hand and waved for Taylor Burris. For those of you unfamiliar with these two, James is the play-by-play announcer for Podium eSports, our supplier for broadcast for our PCA Sim Racing Series last year and for the upcoming 2020 season. Taylor does the “color” commentary on the broadcasts.

And as we chatted, waiting for big Jim Hemig to arrive, I realized that I was right to have liked these two guys, although I was meeting them in person for the first time.

When Jim finally arrived (and threatened to change the name of the tent from Porsche to Ford Focus) it was great to see something like an instant comradery break out. New faces, suddenly familiar.

Saturday morning, finding the guy in the white LAP shirt, Dewey Kang (Metropolitan New York Region PCA), whose graciousness and excitement was a theme during the weekend, was great. Another person I’d known only from “online”, now a face-to-face good guy.

And later that morning, toward noon, John Mallia (Chicago Region PCA), and Michael and Peter Polasek (Northern New Jersey Region PCA) arriving at the tent to join the rest of us. I’m old enough, I guess, to have hopes about people, and appreciative enough to recognize when every hope for how they will be is surpassed.

We signed some caps, and took a few pictures, the eight of us… just kind of “hung out” for a while.

Yeah, it was a wonderful weekend, the weather great and the outcome of the race one spot away from perfect.

But after all the excitement of the cars on track, the best part of the weekend was these guys… Mike and Peter Polasek, Dewey Kang, John Mallia, Taylor Burris, James Pike, and Jim Hemig.

The best part of the weekend wasn’t those wonderful RSRs – it was these guys. 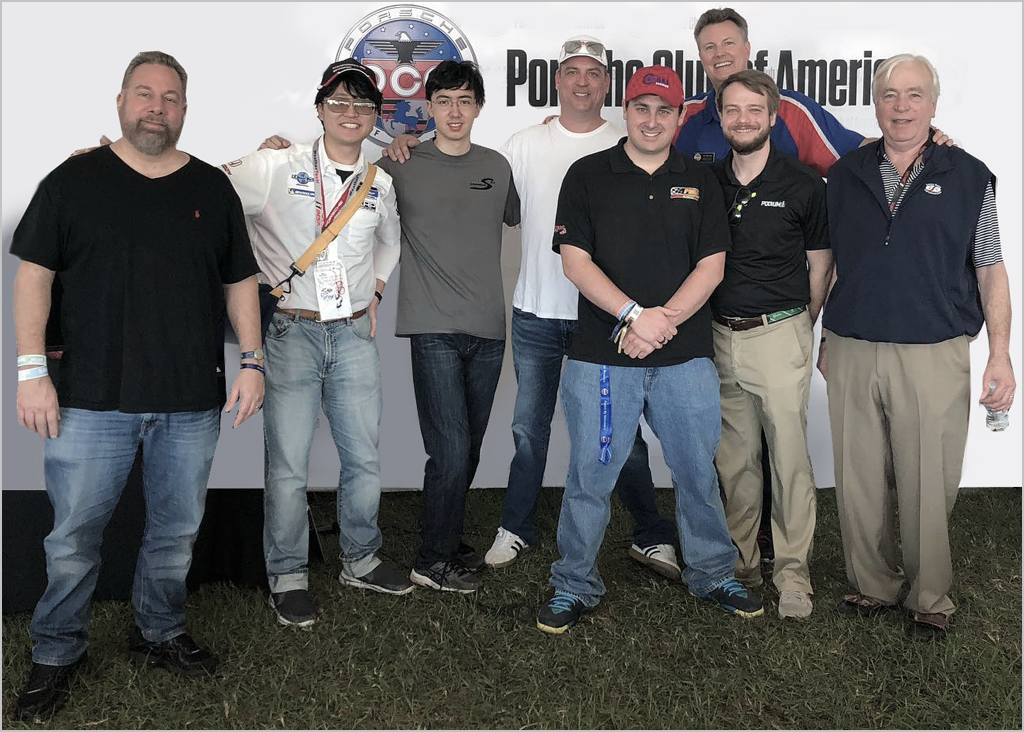